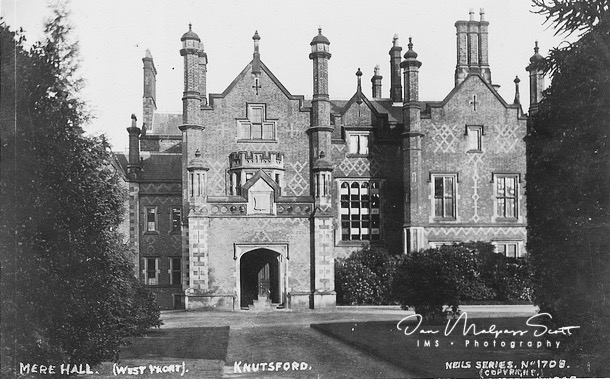 Mere New Hall stood to the east of the village of Mere and the junction of the A566 and A50 roads in Cheshire, England. It was largely destroyed by fire in 1975.

It was built in 1834 for Peter Langford Brooke to replace Mere Old Hall, the architect being Thomas Johnson of Lichfield. It was a large symmetrical house in Elizabethan style, constructed in brick and decorated with diapering. Its features included a porte-cochère, turrets, and shaped gables. However the house proved to be too large for the family and they returned to the Old Hall in 1914, selling the New Hall which became a country club in 1938. In 1975 most of the building was destroyed by fire, although a fragment of it remains, together with a modern extension. As of 2011 it is a golf resort and a spa.

There are two structures associated with the house that are is recorded in the National Heritage List for England as designated Grade II listed buildings. These are the stable block, and the entrance arch and gates.