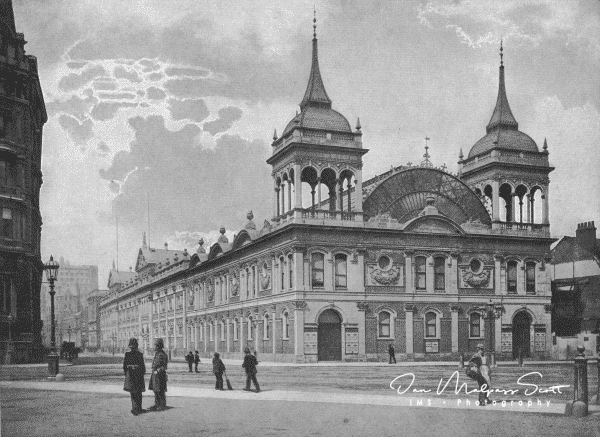 The Royal Aquarium and Winter Garden was a place of amusement in Westminster, London, opened in 1876. The building was demolished in 1903. It was located immediately to the west of Westminster Abbey on Tothill Street. The building was designed by Alfred Bedborough in a highly ornamental style faced with Portland stone. At the west end of the building was the Aquarium Theatre – in 1879 named the Imperial Theatre. Methodist Central Hall is now located on the site.

The Royal Aquarium opened on 22 January 1876. The board of directors included Henry Labouchère, the financier and journalist; William Whiteley the retailer; and Arthur Sullivan, the composer. It was intended to offer art exhibitions, concerts and plays, among other intellectual entertainments, like The Crystal Palace.

The main hall was 340 feet (104 m) long by 160 feet (49 m) wide. It was covered with a roof of glass and iron and decorated with palm trees, fountains, pieces of original sculpture, thirteen large tanks meant to be filled with curious sea creatures and an orchestra capable of accommodating 400 performers. Around the main hall were rooms for eating, smoking, reading and playing chess, as well as an art gallery, a skating rink and a theatre. The Aquarium adopted an expensive system of supplying fresh and sea-water from four cisterns, sunk into the foundations. This quickly ran into operating problems. The large tanks for fish contained none and became a standing joke; but the directors did display a dead whale in 1877.

By the 1890s, the Aquarium was acquiring a risqué reputation, with unaccompanied ladies promenading through the hall in search of male companionship. Emily Turner, a visitor from Montreal, worked as a salesgirl at the Aquarium between October 1891 and January 1892. She met a Major Hamilton there, who bought her supper at Gatti’s (in the Strand) and took her to entertainments at the Alhambra Theatre, promising to set her up in rooms in Lambeth. The major disappeared after providing her with ‘gelatin capsules’ for a cough. The pills made her ill, and she stopped taking them. The leftover pills were passed to Scotland Yard, and she was traced by Inspector Jarvis of the Metropolitan police, who identified the missing major as the serial killer, Thomas Neill Cream. The pills were eventually analysed and found to contain only quinine. Turner refused to identify Cream for fear of having to appear at the trial – and have her own respectability questioned.

The building, known as “the Tank,” lost its popularity and was sold to the Wesleyan Methodist Church in 1903. The Methodist Central Hall was built on the site in 1911.