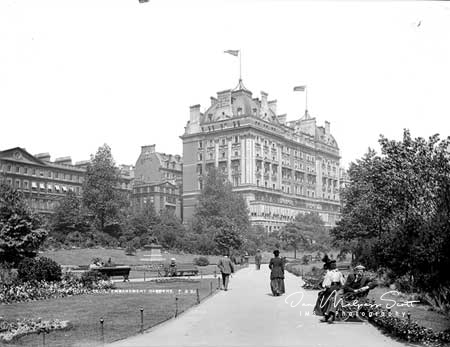 The Hotel Cecil was a grand hotel built 1890–96 between the Thames Embankment and the Strand in London, England. It was named after Cecil House (also known as Salisbury House), a mansion belonging to the Cecil family, which occupied the site in the 17th century. Designed by architects Perry & Reed in a “Wrenaissance” style, the hotel was the largest in Europe when it opened, with more than 800 rooms. The proprietor, Jabez Balfour, later went bankrupt and was sentenced to 14 years in prison.

The hotel was requisitioned for the war effort in 1917, and the very first headquarters of the newly formed RAF took up part of the hotel from 1918 to 1919. A green plaque was affixed just inside the outer Strand entrance to the building in March 2008, proclaiming: The Royal Air Force was formed and had its first headquarters here in the former Hotel Cecil 1 April 1918.

Below it is a brass plate stating: This plaque was unveiled by the Chief of the Air Staff Air Chief Marshal Sir Glenn Torpy to mark the 90th anniversary of the formation of the Royal Air Force.

The hotel was the base for a Palestine Arab delegation that arrived in London in August 1921 and spent almost a year there, protesting in vain against the proposed terms of the British Mandate for Palestine. The president of the delegation was Musa Kazim al-Husseini; its secretary was Shibli al-Jamal; the other delegates were Tawfiq Hammad, Amin al-Tamimi, Ibrahim Shammas and Mu’in al-Madi; the assistant secretary was Dr Fu’ad Samad.

The Cecil was largely demolished in Autumn 1930, and Shell Mex House was built on the site. The Strand facade of the hotel remains (now occupied by shops and offices, including those of Interbrand), with, at its centre, a grandiose arch leading to Shell Mex House proper.

Now that Shell Mex has relocated, the block is known as 80 Strand and is occupied by a number of companies including Pearson PLC subsidiaries Financial Times, Penguin Books, Dorling Kindersley and Rough Guides.