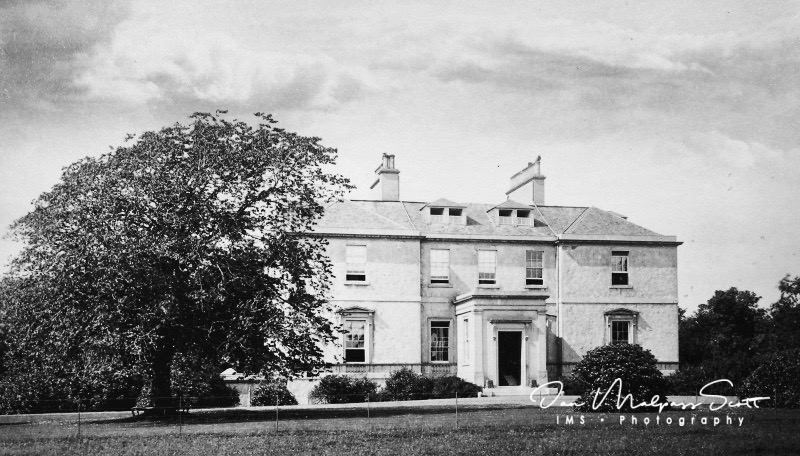 Shewalton House and estate were composed of the ‘Lands of Shewalton’ and the laird’s dwelling, originally a tower castle and later a mansion house on the River Irvine in the Shewalton area, two miles from Irvine and west of Drybridge village, East Ayrshire, Dundonald Parish, Scotland. In 1883 the Boyle’s estate of Shewalton was 2,358 acres in extent in Ayrshire and was worth at that time £2,708 a year.

Colonel John Boyle in 1806 had the mansion house built to a Georgian design, backing onto the River Irvine. The building had a partly subterranean ground floor with two floor above and a rather unusual attic space. Two hipped roofed bays stood on either side of a slightly recessed central bay area, fronted by a solidly simple porch. Another wing was later added to the western aspect of the mansion.

In 1896 the OS map shows a large walled garden, Shewalton Mains Farm and lodges at the end of the East, West and Mid drives. The mansion house had fountains in the gardens on the river facing side and a small summer house was located in an elevated position near the river bank. George Frederick Boyle (1825-1890) was the 6th Earl of Glasgow and he bankrupted the estate through generous endowment of the Tractarian movement of churches in Scotland, particularly his funding of the Cathedral of The Isles on Great Cumbrae. In 1890 the earldom passed to David Boyle of Shewalton (1833-1915), the earl’s cousin, who decided to sell his own estates, including Shewalton, to buy back the Kelburn Estate.

OS maps show that the mansion house had been demolished by 1958 and the main remaining estate feature was the walled garden, all three lodges having also been demolished as had the old school building next to the east lodge. Shewalton Lodge and Tanglewood are two properties now (2014) located within the old estate grounds.