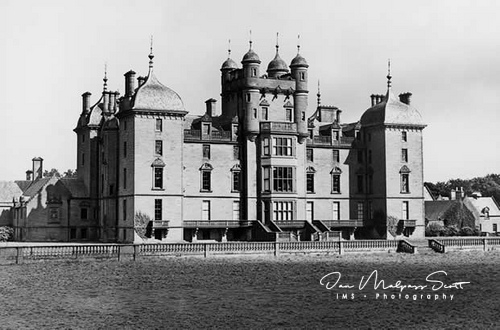 Panmure House was a 17th-century country house in the Parish of Panbride, Angus, Scotland, 4 miles (6 km) to the north of Carnoustie. It was the seat of the Earl of Panmure. It was rebuilt in the 19th century, and demolished in 1955.

The Panmure estate was inherited by the Maule family in 1224, and the remains of Panmure Castle are located close to the site of the house. Panmure House was designed by the king’s master mason John Mylne, although he died in 1667, before it was completed. The client was George Maule, 2nd Earl of Panmure (1619–1671). On Mylne’s death, the work was continued by Alexander Nisbet, an Edinburgh mason, and the interior was fitted out by James Bain, the king’s wright. Sir William Bruce was sometimes credited with the design in the past, and he did apparently advise the Earl after Mylne’s death, but he only designed the gates and gate piers. After the death of the 3rd Earl, his son James, now 4th Earl, added the wings. The 4th Earl was deprived of his titles and estates after taking part in the Jacobite Rising of 1715, although Panmure passed to his relatives, the Earls of Dalhousie. In 1852–1855, the house was extended on the instigation of Fox Maule, by the architect David Bryce in the Scottish Baronial style. Panmure House was demolished in December 1955.

The Panmure Testimonial, a 105-foot (32 m) monument designed by John Henderson and erected in 1839 for William Maule, 1st Baron Panmure, remains on the estate.